I was born in a little town on Colorado's Western Slope. We went to a little country church where everyone knew each other and took care of each other. It was my first taste of community. The year I was 7 I asked Jesus into my heart at vacation bible school. This was also the year my father left. My mom and I left the only home I had ever know to move to Wyoming. There our family helped us get on our feet again. One of the first things we did was find a church. I have so many fond memories of the people there who took me under their wing and made sure I was taken care of. I was always a pretty good kid, according to my mom, with a variety of friends. I seems that I was always well-liked by all the different groups in junior high and high school, but I never felt like I fit in.  My mom taught me to find others that didn't fit in and be their friend. This
Since I’ve gotten sober I’ve had my mom come in and out of treatment and my life, my sister too. I’ve lost a lot of family and more friends than I can count to this disease of addiction. But at least I haven’t lost myself. Sure, I’ve had bad moments—I went through a breakup around the same time that a close friend of mine died, but I didn’t let that send me back out there to using. Nothing’s been easy, but recovery is the best thing that’s ever happened to me. There wasn’t a specific event that saved my life; it was my own spirituality and surrender that did it. I know without a doubt in my heart that if I’d continued using I’d be dead. Not in trouble, not in jail—dead. I remember sitting with my first sponsor and being so ashamed to tell her that I’d never felt happy in my entire life. She was like, “It’s ok, you will be.” And she was right. Today I work as a project coordinator for a corporate moving company and I live with my boyfriend, who has four years sober, in downtown Houston. I go to meetings regularly and work with my sponsors and sponsor other teens. I’m completing an internship in wilderness-based recovery at Cornerstone. And it’s all downhill from here; I’m only 18, I’ve got a whole life in recovery ahead of me! I’m like, dude—what great stuff is going to happen next? - See more at: http://www.phoenixhouse.org/news-and-views/true-stories/true-story-savanna/#sthash.wUOQQfxH.dpuf

Edwin and Karen were married in Laramie Wyoming on Feb 10th, 2001, while Edwin was serving as a military police officer in the US Army. After serving three years at Fort Sill, Oklahoma, the Aldrich family moved to Colorado Springs in the spring of 2003. Shortly after moving to Colorado Springs, the Aldrich family added a daughter "Diamond". Over the next several years, "Big D", "Boo", and "Z" also joined the family, as did Martha Johnson, Karen's mother, who moved in in 2009. The Aldrich family has attended Fellowship Bible Church since coming to Colorado and have been active in the community class there. In 2008, Edwin and Karen accepted an invitation to join the Men and Women of Praise Motorcycle Ministry and to join them in ministering to the poor and homeless on the streets of Colorado Springs. Over the last six years, the Aldrich family has served with Colorado Springs Biker Church, Set Free Ministries, More Than A Meal, Pizza In the Park, and numerous other groups who serve the poor, the addicted, the homeless, and others in need. 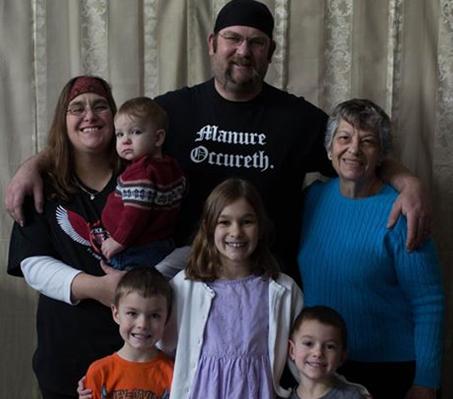 Sunday morning and evening, midweek prayer meeting, Fridayyouthgroup, and a number of bible studies in between. I sang in the choir and all around was a pretty good church boy. I never really had a rebellious period as a teenager, and I never tried drugs although I did try drinking a few times early in high school. I came to a point in my early twenties where I was really trying to figure out who I was and what I was going to become, and as a result, I dropped out of school at the University of Wyoming and joined the Army as a military police officer. Just before I left for the Army, I asked Karen to be my wife and we were married just a few months after I got out of basic training. My first and only duty station was at Fort Sill, Oklahoma, and after three years we left the Army and came to Colorado Springs where I got a job as a civilian working for the Army. Life looked pretty good for us here, and then things started to unravel. I had made some bad choices while we were still living in Oklahoma, and I got notice that the police there were looking for me. I turned myself in and after the whole thing was done, I ended up spending a few months in jail and losing my career with the Army and any hopes of being a police officer again. I sank into a kind of funk, not really a depression, but close. I sought help from my old church friends, and I got a lot of "God forgives you, but you've been disqualified from ministry or leadership". I thought I was pretty much done doing anything for God, but thankfully, He was not done with me. Through my connection with a men's bible study and the community class at Fellowship Bible Church, I was able to find God's purpose for me once again. Shortly after that, God brought me into the motorcycle ministry. At first I was reluctant to do anything that even resembled leadership, but eventually, I became a vice-president, then president, and finally in 2011, I received an ordination as a pastor in recognition of God's calling and gifting in my life. In spite of the fact that I often feel unworthy to be called to this ministry, God has been incredibly faithful in providing. He has not only provided everything my family has needed time and time again, but He has also provided us with an incredible support community, an amazing group of ministry partners, and an ever increasing list of ministry opportunities.

advice has gained me the most unique group of friends imaginable, and launched meinto seeing people for who they are beyond outward appearance. This has been a great asset in loving the homeless and addicted God has brought my way. In my junior year we moved to Laramie, Wyoming, a town almost twice the size of the one I had lived in since age 7. There I finished high school and attended the University of Wyoming. I earned degrees in Secondary Education, Social Studies and a second Bachelor's in History. After I graduated, I found a job part-time in a company that was helping adults with disabilities to get jobs and live as independently as possible. I was hooked. The people that I was privileged to serve there were so uniquely wonderful and taught me so much about being comfortable being who God made you to be. After Ed and I got married, I continued this career until our second child was born and it was decided that I would stay home and care for our growing family. When Ed went to jail and our life was forever changed, I learned even more the value of a community of people who loved me no matter what and that has created in me a passion to help others find community wherever life takes them. My home is, for me the place where most ministry happens. My door is always open and this is taken advantage of by many people who come to talk and eat. There is often the rumble of bikes in the driveway and friends who just happened to be in the neighborhood. God is teaching me that the greatest thing there is is unconditional love, the kind that Jesus showed and that sharing that wherever I am opens many doors for sharing His love with others.

number of new ministry connections. So far, we have supported our ministry work almost entirely by the work we do as small business owners, and while we have had a number of struggles with owning a construction company in a down economy, we have been able to witness God's faithfulness in meeting our family's needs and providing for our ministry work. In the last year, however, we have been feeling increasingly lead to step away from our business and dedicate more of our time to working with the people God has called us to. As a result, we sought for a way to be able to raise support for the work we were already doing and founded the project His Urban Presence with the Joy to the World Foundation to process and distribute donations as well as ensure compliance with tax regulations. So now, starting with March of 2014, we have given ourselves two years to raise support and transition from our business to full-time ministry work. We are excited to see where God leads us in the future, and we look forward to watching Him supply our needs in this new chapter of our lives and ministry.

2016 came as a year of many changes. entering the year, we knew that we would have to make some decisions about continuing to operate our business or to close and pursue more full time vocational ministry. After much prayer and consideration, we decided to close our granite company in June, and to seek out a place from which to engage the community of Knob Hill in Colorado Springs. We were blessed with a 1600SF building space that had sufficient space to begin the launch of a community center aimed at giving a safe place for community connections to develop as well as a place for personal, spiritual, and community development. The House of Misfits was born.

I was born in a small town in western Nebraska and raised in a series of small towns in eastern Wyoming. My father was an itinerate mechanic, and so we moved to wherever the work was available until I was ten years old. After we moved to Laramie, Wyoming,  my family decided to put down roots and so I was in Laramie until after I graduated high school. One thing I remember growing up was that we always went to church, in fact, most of my earliest memories are of going to church or church related functions. When we came to Laramie, we became members of a Baptist church, and so I was baptized and became a member of that church myself around eleven years old. I went to church at every opportunity,